True cold came early this year. Now it’s shotgun season around the barn, and even on mild days it’s not safe to ride out. Which means we’re stuck in the indoor arena.

Don’t get me wrong. I’m grateful we have the ability to ride indoors. In some ways, it’s even kind of nice. All summer, we ride out in a variety of different environments, each with different challenges. This means what we focus on while we ride changes organically with the seasons. The challenge with the indoor arena is keeping things fun and interesting.

The last few weeks, I’ve been focused on my seat. On Steen, I’ve been starting most rides with no handed figure-eights at the walk and trot, then progressing to a canter on the rail, plus stops and changing directions, all with the reins set down on the horn. In some ways, this is a silly thing to work on. I have no interest in bridleless riding. But I seem to overuse my hands when I’m in the indoor arena for some reason. It’s a good way to force me to think more and about my seat and less about my hands.

Most days, Steen and I accomplish all this easily and consistently. We do lose precision at the canter. He relies on the rail a bit more than me in terms of deciding where to go. If I ask him to come off the rail and cross the center, he often gets confused, and thinks I want more impulsion. That’s led to a couple kind of funny unplanned sprints up one side of the arena.

I’ve also been working on riding Aiden with no hands. This is brand new territory for us. For the last week or so, we’ve been building on our progress at figure eights slowly. For many rides, we’d get the change of the direction and start of the bend pretty good, but we’d always lose it and end up straight before we got back to the center.

Yesterday, though, Aiden and I were having a great ride. We reached a moment where I could just feel he was focused on my seat and legs. I set my reins down, and we walked our first few totally complete no-handed figure eights. Woo. They weren’t as precise as the ones I get on Steen, and also there were on the large side. Still, though, it felt pretty good.

I’ve also been working on finding ways to encourage Aiden to engage his hind end more consistently. This is tricky for me. Aiden is big. He’s as solid 15.3, and he seems to just keep gaining more and more muscle. He’s also on the long side, and he’s the least upright in the hind of any horse we’ve had. This means it’s more work for him to keep his hind engaged.

I’ve been riding him consistently in the hackamore for the last few weeks. When we got Aiden, he’d spent quite a few years doing dressage and jumping. It’s evident he’s pretty used to leaning on pressure. We’ve come a long way with this, but my focus lately has been on getting him to respond to lighter cues, and being more consistent with elevation of the poll. We seem to balance a bit better in the hackamore overall without me having to do as much. Of course, I can always check him back onto his hind end, but I’m trying not to. I’d like him to stay there without me babysitting him quite so much.

To this end, yesterday I worked on figure eights that were a little tighter than what’s naturally pretty easy for him. We were trying to achieve a good bend in the body while maintaining impulsion. Here’s a little snippet of video Brian took.

Certainly, there are all sorts of things that aren’t perfect here. (We dribbled to a stop because I changed my mind about what I wanted to do there at the last second.) But we’re getting better results on less pressure, and working towards more precision one ride at a time. 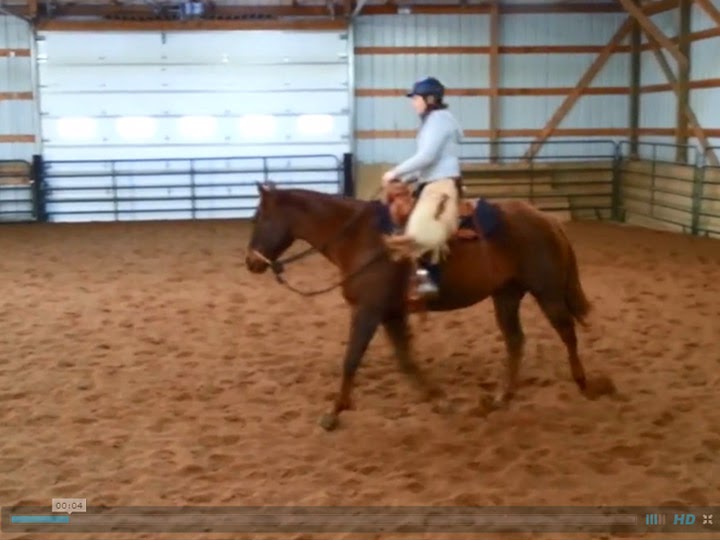 A few of the things we like to do with our horses to keep them engaged are, short serpetines, backing circles, and lots of walk/stop/backup transitions. For what it's worth, I think he looks super!