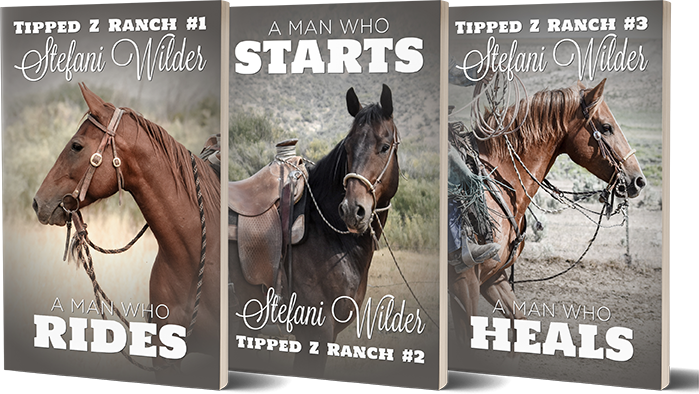 It has been well over a  year since my last post. And part of the reason I haven’t written anything here is because things with the horses have been a bit tough. I knew leaving behind amenities like an indoor arena would mean we would ride less in the cold. What I didn’t fully foresee was how having only grass footing available would mean a lot of days when the weather would permit riding but the ground would not. Between the winter, the wet, and the logistics of helping to care for and manage horses for the first time since I moved to Iowa (instead of just boarding them), you could say last year did not go quite as planned. To sum up: I haven’t spent so little time in the saddle since before I got Steen. 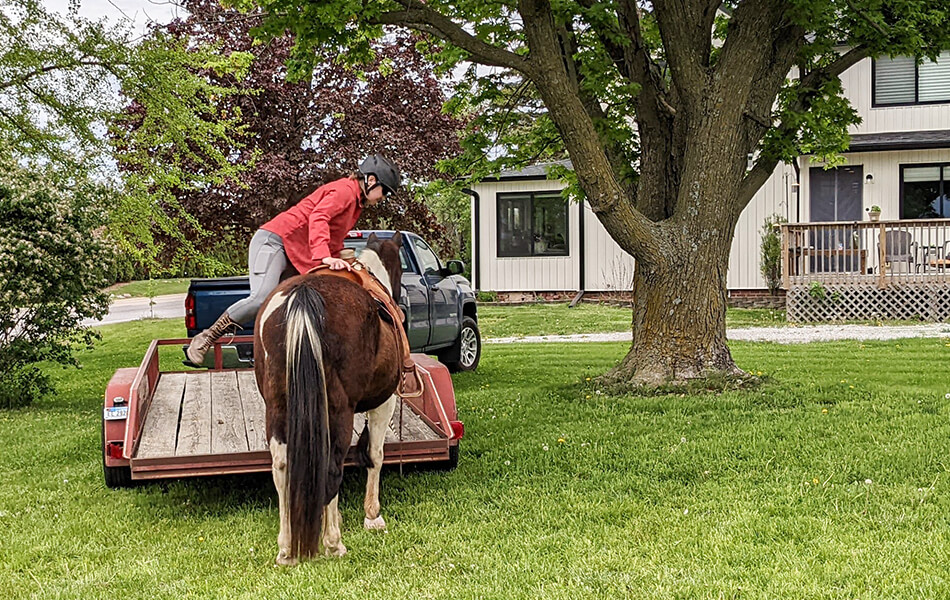 Mounting off random objects because why not?

The unpredictable and intermittent nature of when we can actually ride has also made progress with Roland extremely difficult. Of course I’ve seen for myself in the past that horses can really only learn when you work with them consistently. But I have never before been in a situation when there was a horse I needed to work with and conditions that literally made consistent work impossible. We made some headway last summer. But then fall rolled in and our work ground to a halt.

To make matters worse, we had an extremely wet spring. It wasn’t until this week that the ground finally dried out enough to allow riding. Last week I manage to ride Saturday and Sunday. Which felt like a triumph. This week so far I’ve ridden Monday and today (Friday). But we’ve got rain in the forecast so we’ll have to see what the weekend brings.

By the time I swung my leg over Steen’s back this spring, it had been the longest I’d gone without riding him since I’ve owned him. By a lot. He’s just days away from his 22nd birthday and he had those soundness issues last summer. So my primary goal with getting going again has been feeling him out without physically taxing him in any way.  After four very light rides, I’m really happy with how things are going. He feels sound so far. And while we’re both rusty and our communication has lost a good deal of its refinement, he seems really happy to get back to work. 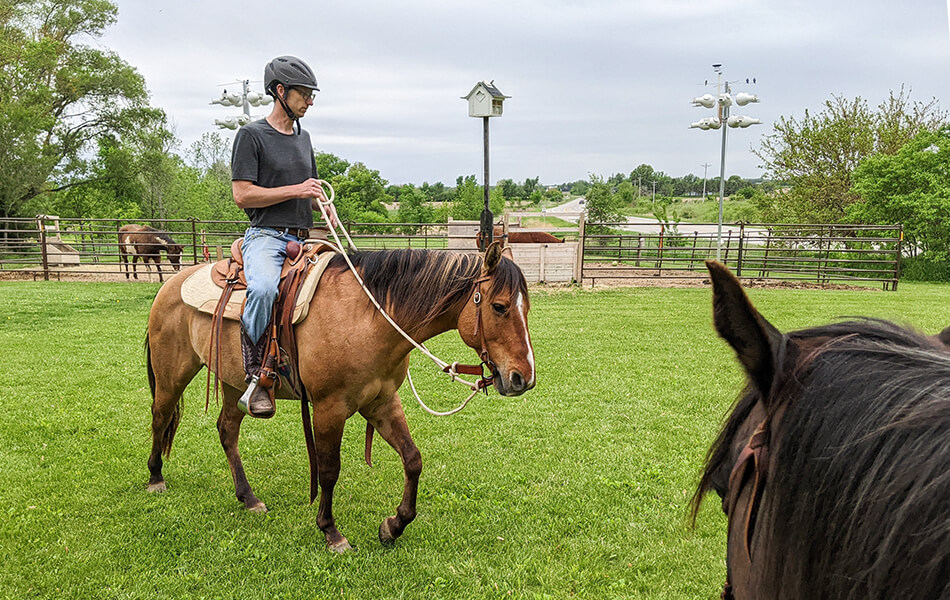 So that’s good news. My primary goal for the first part of the summer is going to be getting back to regular riding and easing him very carefully back into fitness.

We also have plans. I don’t want to say too much here because parts of this are not entirely final. But we’re making some changes to the way our setup is laid out. With any luck, we’ll have a nice-sized round pen with sand footing within the next few months. I think that will make all the difference with Roland. 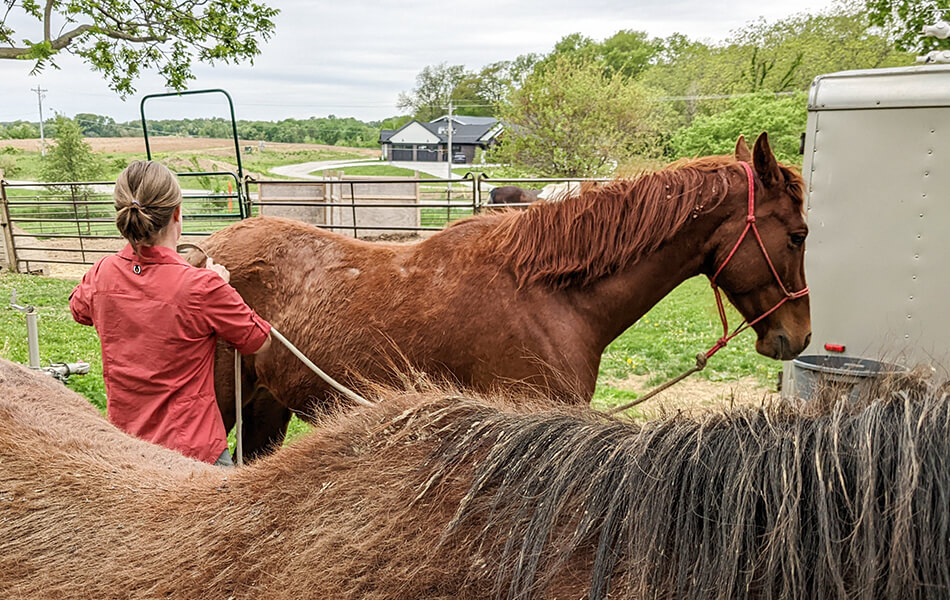 Me helping Roland remember how to stand still for grooming.

I’m also hoping to blog more! But I’ve said that before so we’ll just have to see how it goes. 🙂

I have conversations with people a lot about whether or not I’d prefer to have my horses on my own property so I could do everything my way. I’ve done both boarding and having them at home for a number of years, and there are definitely pros and cons both ways. It’s moot right now, since it’s not financially feasible to have them at home, but I know I would not actually ride more that way, and it’s likely I wouldn’t actually spend any more time doing “fun” things with the horses than I currently do. Anyway, congrats on getting… Read more »

Yeah, there are definitely pros and cons. I was often frustrated by various aspects of boarding but was also well aware of the upsides of paying someone else to do all the work so you can have all the fun. 🙂 Luckily so far it does work out really well to have two sets of people (K and her husband, me and Brian) helping with the logistics and chores. If they want to travel, obviously we take care of the horses. And vice versa. So that helps a lot. Mostly it’s just the mud. Iowa is so muddy. We can’t… Read more »

Yeah, having a “tag-team” type horse care situation does sound nice. Everyone I know with horses boards because none of us can afford property, so that’s not currently a viable option either. 🙂 But we do fill in for each other as far as checking on horses or feeding supplements when people go out of town. And a round pen is probably the most useful of accommodations to have (at least, I’ve always thought so). Can double as a hospital pen if you need one too (or maybe you have another place for that). We definitely have our share of… Read more »

We really lucked into the tag-team situation. Multiple layers of things improbably working out the right way at the right time got us here quite unexpectedly. I’m not sure we ever could have orchestrated this if we’d actually tried to. As for riding in the dry lot, not a dumb question. We did think we’d be able to initially. The main problem is, indeed, mud. And the nearly as big problem is that much of the lot is significantly sloped. If it’s even damp, parts of it are slippery. Steen is old enough now that working on canted terrain is… Read more »

Yeah, the place I board is 200 horses at max capacity. But I don’t think it’s been maxed out since 2016 or so (at least, that’s how it’s seemed to me, I don’t know actual numbers). Not all of them are boarders though; some number of them are school horses, resale projects, and the barn owners’ horses (polo ponies, jumpers, their kids’ horses, etc). They also have another facility that’s only open part of the year right now. They do bigger shows, polo games, and other big events out there, and have varying numbers of horses on the property (from… Read more »

Wow. That is a big barn with a lot going on. My mother-in-law did a share board at a place with similar capacity and a showing emphasis in the Chicago area. I rode there once and I could actually see the attraction in some respects. But yeah. It was a totally bonkers atmosphere as far as my experience with horses up until that point. Always. Pros and cons. In any case, it strikes me as beneficial to experience a few different ways of having horses over time. I’m glad the current situation is working out for you at the moment.… Read more »